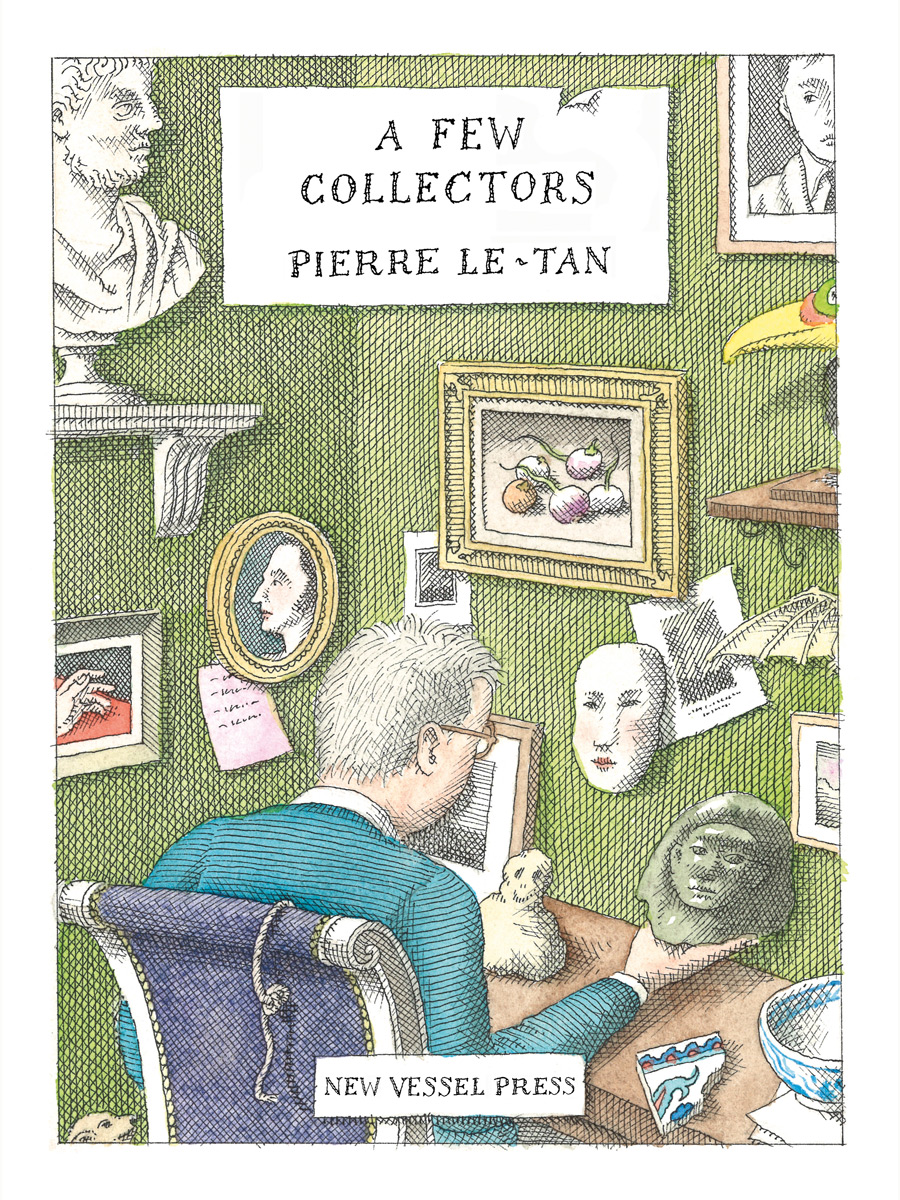 Beloved Parisian artist Pierre Le-Tan, known for designing New Yorker magazine covers and collaborations with fashion houses, summons up memories of inveterate art collectors in this utterly charming illustrated volume. He evokes fascinating, sometimes troubled figures through an array of intriguing and curious tales. With seventy of his distinctive pen and ink drawings—in vibrant color with meticulous cross-hatching—A Few Collectors opens a window onto the vast or minuscule world created by collectors out of a mix of extravagance and obstinacy. It recounts encounters in Paris, the Côte d’Azur, North Africa, London and New York, where Le-Tan’s subjects have amassed a range of treasures. Some involve famed figures like former Louvre Museum director Pierre Rosenberg. Others are insolvent aristocrats, princes of film and fashion, expatriate dandies, and flat-out obsessive eccentrics. Le-Tan devotes perhaps his finest chapter to himself.

Excerpt from A Few Collectors

I can’t recall what the first thing was that I considered a collector’s item. All I can say is that at the age when children love toys, toys interested me only if I found in them a certain beauty. So I can still see the gift presented to me when I, rather late, finally became toilet-trained: a sort of little carriage drawn by a white horse. What I found appealing was its beautiful black lacquer. I had no desire to play with what had already become a piece of my collection, a thing I wanted simply to contemplate.

Very early on, when I was around seven or eight years old, my father would take me to antique shops and even to the flea market. I can still hear the Asian art dealer talking to him: “Tell him to choose a print.” He had the same intonation as actors from the time of black-and-white films. I was in heaven. I could list all the shop names that would mean nothing to anyone because they all closed long ago.

My father used to give me secondhand objects: a slightly chipped East India Company cup, a fragment of a Chinese painting, an old volume of the Manga, the encyclopedia of sketches by Hokusai, whom I still consider to be the greatest Japanese artist and some of whose drawings I own today.

In the bedroom that I shared with my brother, I set up a miniature museum where each object was accompanied by a carefully handwritten label. Visitors—from Prince Buu Loc, an old friend of my father, to radiator repairmen—were allowed to write their impressions in a guest book.

Around eleven years of age, I became interested in weapons and armor from Japan. This infatuation stemmed from an old book of my father’s that listed extensive details about sabers, breastplates, and helmets. I tried to copy it. From then on, I began compiling a collection whose crowning element was a complete set of armor acquired when I was about fourteen years old.

This incessant desire to accumulate abated a bit at the age when all of a sudden you start thinking of going out at night, preferably accompanied. A few objects then disappeared in order to subsidize other needs. But this was merely an interlude.

My tastes changed as well. Many long stays in London opened up new horizons for me. Through reading Virginia Woolf and other members of what was called the Bloomsbury group, I discovered the painters, Virginia’s sister Vanessa Bell, Duncan Grant, and Simon Bussy, an exquisite French artist friend of Matisse married to the sister of Lytton Strachey, an important writer in the group. This then led to learning about other aspects of English painting from this period.

It was also around the time that I encountered the irresistible attractions of Parisian auction house salesrooms. I vaguely recall that the old Hôtel Drouot was under reconstruction. The auctioneers had taken over the former Gare d’Orsay before it became a museum. I realized that, every day, copious amounts of ceaselessly replenished merchandise were put on offer to covetous amateurs and professionals. Later reinstalled on rue Drouot, near where I lived at the time, this place of perdition became for me the equivalent of a casino for a gambler. Along with those in the auction houses in London and New York, the temptations were constant.

“In his droll, enchanting book ‘A Few Collectors,’ Le-Tan reflects on 20 obsessive subjects, including himself, and the extraordinary objects they acquired. His elegant profiles … are subtly comic and rather mournful, illustrated in his distinctive style: fine ink cross-hatching and watercolors the pastel shades of French macaroons. The pictures are whimsical and enigmatic.”

“These slices of lives illustrate something about the bizarre impulse toward relentless acquisition, even when it comes at a cost … Funny and whimsical. There are wonderful asides that evoke [Pierre Le-Tan’s] colorful social scene … It is also poignant.”

“The reader of this jewel of a book will feel a range of emotions from amusement to sorrow … Through vignettes of collectors he knew, Le-Tan poignantly limns what makes collecting so satisfying, but also so heartbreaking … The book is garlanded by Le-Tan’s own illustrations.”

“I found A Few Collectors, comprising 20 profiles lovingly written and illustrated by Pierre Le-Tan, a complete revelation … The volume is one of the most charming and haunting I’ve ever read, a must-have for any collector, dealer or lover of art.”

“Le-Tan was an admired illustrator, his drawings distinguished by delicate crosshatching and an unwavering line in India ink and watercolour … This delightful book reveals he was also an indefatigable collector of collectors, and he pens portraits of those similarly and pathologically afflicted … Le-Tan is the master of epigrammatic understatement.”

The World of Interiors

Monique Truong, author of The Book of Salt and Bitter in the Mouth

“Splendidly written, engagingly illustrated memoir about … the eccentricity of those who acquire and a subjective pathology of collecting artful things … An ode to the oddities of collectors … I had forgotten how much I missed my old friend’s voice and was delighted to read Pierre’s perfect diction—soothing and reassuring—come through on the page.”

“Pierre Le-Tan reminds us that once upon a time works of art reflected the deepest feelings of their owners. I longed to stay in his charmed and delightfully wicked world of eccentric collectors intent on finding beauty in both the humblest and grandest of objects.”

“Pierre Le-Tan was an indefatigable collector who in these pages—as in life—created a dazzling world, profoundly personal, that combined surrealism, romanticism, and his encyclopedic knowledge of the decorative arts.”

“An enthralling testament to the passionate pursuits of true collectors—an entertaining, colorful study of the psychology of collecting and an irresistible peek into a compendium of fascinating lives.”

“I savored A Few Collectors with unmitigated pleasure … Calm narration, soothing atmosphere. Le-Tan’s writing has the same throwback sensibility as his immediately recognizable line drawings … He manages to casually reveal to us that the madness of accumulation, of ownership and of exhibiting can sometimes conceal grace.”

Pierre Assouline, author of An Artful Life: A Biography of D. H. Kahnweiler

“Pierre Le-Tan’s delightful book provides charming impressions of different collections. His very definition of collecting as ‘essential and completely useless’ captures the insouciant spirit in which this volume is written as well as wonderfully illustrated. The book is a collection in itself—of objects amassed by a variety of fascinating people, of intriguing memories, and of the author’s rambles through Paris.”

Victoria Newhouse, author of Art and the Power of Placement and Parks of the 21st Century 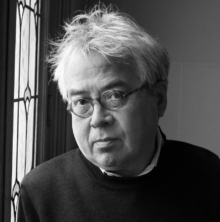