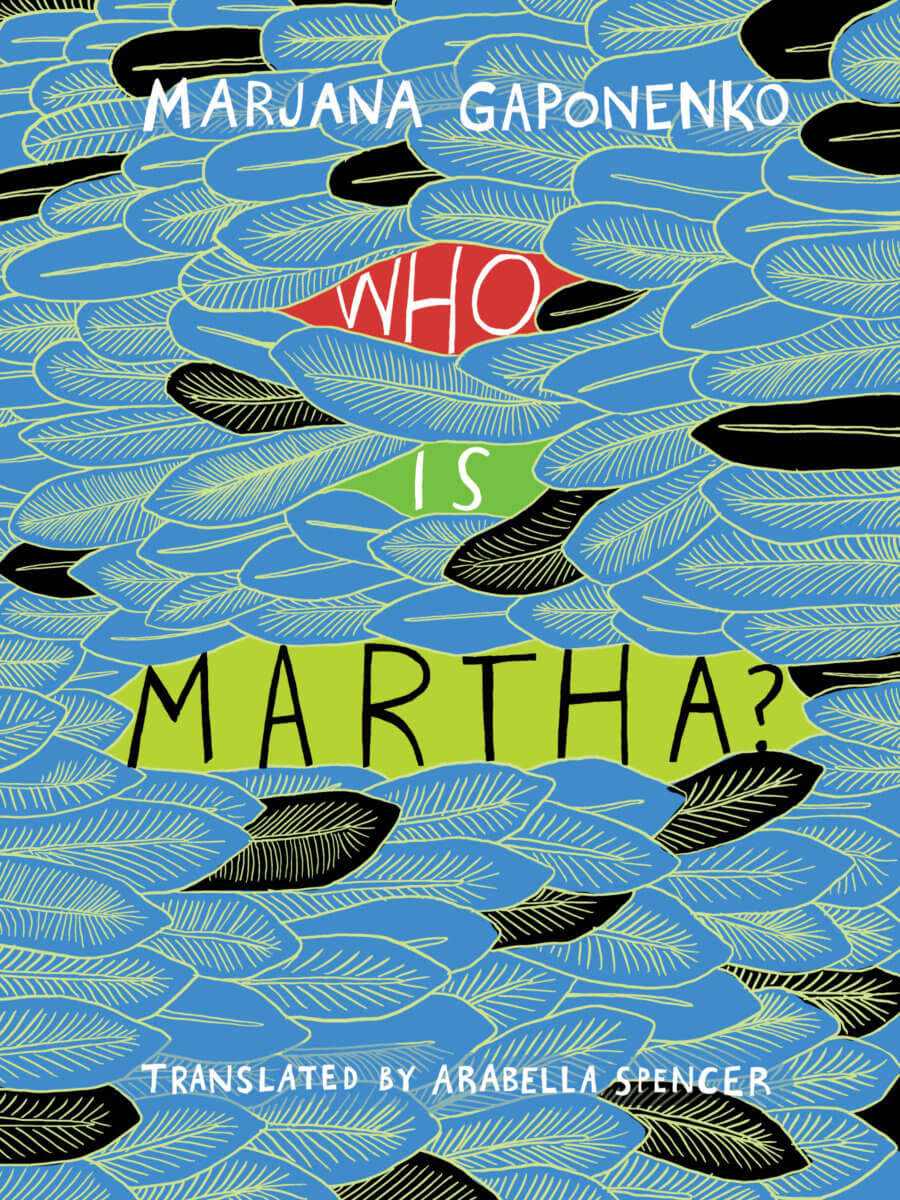 In this rollicking novel, 96-year-old ornithologist Luka Levadski forgoes treatment for lung cancer and moves from Ukraine to Vienna to make a grand exit in a luxury suite at the Hotel Imperial. He reflects on his past while indulging in Viennese cakes and savoring music in a gilded concert hall. Levadski was born in 1914, the same year that Martha – the last of the now-extinct passenger pigeons – died. Levadski himself has an acute sense of being the last of a species. He may have devoted much of his existence to studying birds, but now he befriends a hotel butler and another elderly guest, who also doesn’t have much time left, to share in the lively escapades of his final days. This gloriously written tale, in which Levadski feels “his heart pounding at the portals of his brain,” mixes piquant wit with lofty musings about life, friendship, aging and death.

Excerpt from Who is Martha?

Love is cold. Love is cold. But in the grave we burn and melt to gold … Levadski waited for the tears. The tears didn’t come. In spite of this he wiped his face. Disgusting!

With a fixed stare he had just put the receiver on its cradle. What else, if not impatience, had he sensed in the breathing of his family doctor? Impatience and the buzzing of thoughts that had nothing to do with him, Levadski: Mustn’t forget the baking powder … moth repellent, furniture polish, what else? … He could smell his own tiresomeness through the receiver. Breathe in, breathe out. Hang up, old man, hang up …

Levadski went into the bathroom and threw up. He was overcome by tears. Whimpering, Levadski vomited for the first time in ages. The last time it had happened to him, he had still been wearing knickers. What had the girl’s name been? Maria? Sophia? The young girl had allowed her hand to be kissed by a man with a moustache. In front of her a slice of cake. Jealousy had grabbed the schoolboy Levadski by the throat. He had stopped in front of the window of the café, taken a bow and spilled the contents of his stomach onto the pavement. Touching his chest, he’d slowly assumed an upright position again. The girl had looked straight through him, her dilated eyes filled with a delight not intended for him or the man with the moustache, solely for the slice of chocolate cake.

What made me touch my chest back then? In the mirror, Levadski was clinging on to a glass of water. Had my heart had dropped to the pavement when I was throwing up, had my arms and legs failed me, I would have noticed that something was missing!

Levadski rinsed out his mouth, took the showerhead and aimed it at the dentures he spit out into the bath while throwing up and which now reminded him of a boat capsized in the sick. The jet of water jerkily inched the outrageously expensive and highly impractical ball-retained dentures in the direction of the plughole. He leant forward and skeptically picked them up – a dead creature, from which a final prank was to be expected.

No, he did not want to encounter this girl again. If she were still alive she would either be blind or demented or confined to a wheelchair. What was her name again? Maria? Aida? Tamara?

After Levadski’s performance in front of the window, had she finished her cake? It didn’t matter.

A tablet dropped into the glass of water. After a brief deliberation, it started to fizz and circle: a drunken bee. Carefully Levadski let the dentures fall in after. Plop … Since he had acquired artificial teeth he found this sound soothing, perhaps connected to the fact that it invariably accompanied the arrival of the Sandman. This must have been where its magical sweetness came from. Plop … and Levadski’s eyes would already be falling closed. Plop … and he was already whirring into the sunset on the scintillating wings of a rose beetle. What is sweeter than your chocolate cake, girl? Only sleep. And what is sweeter than sleep? Only death.

On the short and laborious way to the living room, Levadski was annoyed to see his telephone glowing as if nothing had happened, as if he, Luka Levadski, Professor Emeritus of Zoology, hadn’t just had a death sentence pronounced down the receiver. “We need to talk about your results – at the hospital, right away.” Levadski had understood. There was nothing left to discuss. Talk about what? If the results were okay then you didn’t call on a Sunday around lunchtime when old patients were possibly enjoying their deepest sleep. You also didn’t call if the results were bad. If you had any manners, as a doctor, you knocked on the door personally in order to convey the news of someone’s death. The blood was still pounding in his temples. Come in! he said to the doctor at the other end of the line. Or had he merely thought it? More and more often Levadski caught himself barely able to distinguish between thought, speech and silence, and it was becoming less and less important to him.

In two shuffling steps he reached the middle of the living room. Levadski’s books sat stiffly on the branches and twigs of an impressive library. In the dusty sunlight they seemed to be awaiting a small show; the books held their breath, word-for-word. Not today, Levadski thought. A rainbow-colored drop glistened at the tip of his nose before exploding on the parquet floor. Another shuffle and Levadski was already sitting in his rocking chair by the window.

He closed his eyes and was certain: he looked imposing like this, genuine and alive, just as he had in front of the café window. The way he was sitting there with the beam of sunlight on his chest. Or perhaps the beam wasn’t a beam, but a spear driving through an old dragon’s body? He smiled. If someone had observed his face at this moment they might have believed that a wafer-thin slice of lemon had dissolved beneath the old man’s tongue. But there was nobody who could have seen Levadski’s face. Since he had started aging, he had always been alone.

He started to age as a small boy. He aged when a robin redbreast hopped onto his shoulder while he was mowing the lawn. Like the red sky in the morning. Like a freshly baked soft rosy loaf of bread, it perched on Levadski with its thin legs. The robin redbreast decorated him more than any medal. It made him a human being. An old man! Levadski’s watch started to tick, growing louder and louder with every movement of the bird.

He aged when from the window of the school building he observed a jay hiding its booty. The way it let two acorns, one after the other, roll out of its throat, buried them in the ground and marked the spot with colorful leaves. The jay. The blue on the hem of its robe and its jet black sapphire eyes, nodding its head mischievously: Levadski, Levadski, I know that you know! Levadski aged when he gnawed at almost cold chicken drumsticks at weddings or funerals. He aged when with a spoon he dealt a breakfast egg a shattering blow. He aged when in the spa town of Yalta a black-headed gull snatched a piece of cake from his hand. “You have robbed me of the pleasure!” Levadski shouted after it, stamping his foot, and yet immediately knowing: Nothing and nobody can take pleasure away from you. Pleasure is not a piece of cake. He aged especially on an autumn day when he stopped in front of an advertising column covered in film posters, threw back his head to read and was hit in the eye by pigeon droppings. Levadski was stabbed in the heart, in the middle of his aging heart. With every explosion of pigeon wings Levadski aged, with every daub of color that flew by, recognizable as a golden plover, blackbird or starling. He aged when he kissed a girl for the first time and suddenly in the dusk saw a shadow flit past. “Devil take it! A pygmy owl!” he shouted into the frightened astonished eyes of the girl, and he aged, turning a little more into the Levadski he was later to become.

In the end it was music that dealt the ripening old man the crushing blows. It devoured him and spat him out, only to devour him again. The child Levadski, the old man Levadski, too naïve to curse the day on which he imagined he found music. It found him, and it drove into him like an almighty whooping cough, making him more and more hunched, so that he squinted up at it more dwarfed than a dwarf. This is how Levadski wandered through life. His hunch grew like his awe for music and birds. Yet neither the music nor the birds thought about condemning Levadski.

Done, damn it! Levadski feebly tapped his scrawny thigh. So, the suspicion that he had carcinoma of the lung was confirmed! The patient and pseudo-respectful whispering of his doctor at the other end of the line said as much. The news hit Levadski harder than it would have if the diagnosis had been roared down the receiver.

He would have liked to say a prayer, something sublime, but everything venerable seemed either unspeakable or defiled by mortal fear and self-pity. Impure, simply impure. Ultimately everything in this world referred to man, to man alone. Even in the purportedly altruistic stirring of the soul yapped a little I! I! I!, and a tiny actor stood whistling in the wings of the most deceptively genuine feelings. Disgusting, thought Levadski, you can’t even face a stroke of fate candidly. He thought this and knew that another Levadski, as if to confirm his thought, hovered the height of a hat above him, amusing himself at this sight: an old man with lung cancer sitting in a rocking chair, with a pretentious strip of sunlight on his pigeon chest and how strange, all the particles of dust, how they danced in the ray of light making it visible in the first place.

“A deeply compassionate meditation on one man’s life and its impending finality. Amusingly digressive and philosophically rich … Gaponenko, at just thirty-four, remains a serious young talent and someone to keep an eye out for in the coming years.”

“With layers of inventive language, vividly drawn characters, history, music, birds, love, loneliness, and wisdom, this is a brilliant book, rich and satisfying as a Viennese torte.”

“A sweet, sad, sunny meditation on birds and music and the gentle approach of death.”

“A book like a fantastic party, as unshakeable as a child’s faith … Astonishes to the very end.”

“A work of unbridled imagination. Marjana Gaponenko is exuberantly talented, and here she pulls out all the stops.”

“A celebration of creation and all its wonders, full of the joy of life.” 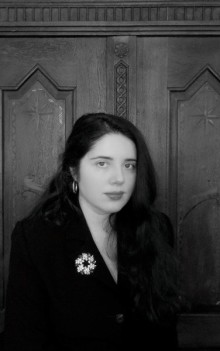