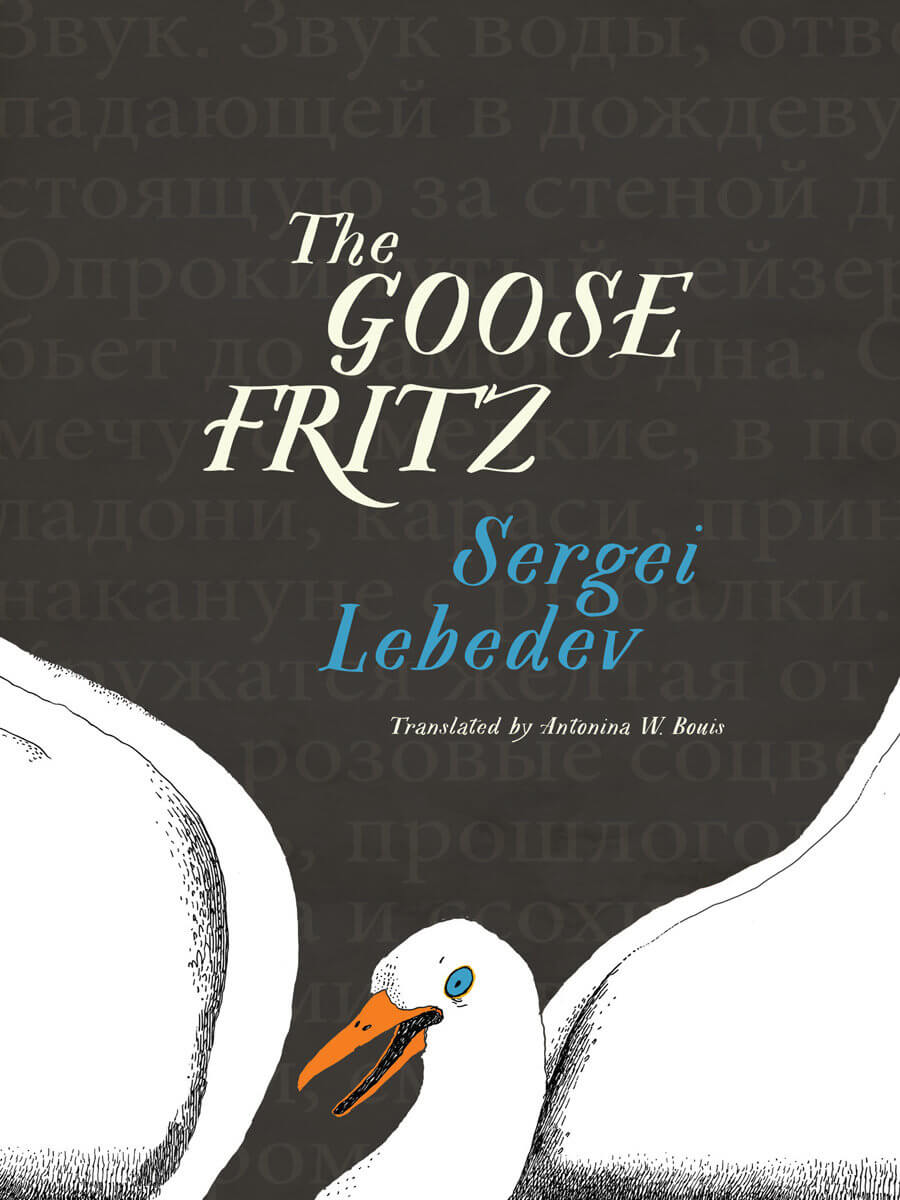 This revelatory novel shows why Karl Ove Knausgaard has likened its celebrated Russian author to an “indomitable … animal that won’t let go of something when it gets its teeth into it.” The book tells the story of a young Russian named Kirill, the sole survivor of a once numerous clan of German origin, who delves relentlessly into the unresolved past. His ancestor, Balthasar Schwerdt, migrated to the Russian Empire in the early 1800s, bringing with him the practice of alternative medicine and becoming captive to an erratic nobleman who had supplied dwarves, hunchbacks from Africa, and magicians to entertain Catherine the Great. Kirill’s investigation takes us through centuries of turmoil during which none of the German’s nine children or their descendants can escape their adoptive country’s cruel fate. Intent on uncovering buried mysteries, Kirill searches archives and cemeteries across Europe, while pressing witnesses for keys to understanding. The Goose Fritz illuminates both personal and political history in a passion-filled family saga about an often confounding country that has long fascinated the world.

Excerpt from The Goose Fritz

In his childhood, once a month, not less, Grandmother Lina told Kirill: “Saturday we’re going to the German Cemetery.”

She packed her bag ahead of time—a trowel for the flowers, a stubby broom for sweeping leaves, a box of tooth powder to polish the marble that darkened quickly from the damp and rot. Grandfather suggested going by car, Grandmother refused; for some private reasons she preferred walking along the road that led from the highway.

Grandfather, Mother, and Father rarely went with her. Once Kirill started school, Grandmother Lina started asking for his help, without pressure, almost shyly, saying his going would make things easier for her. His parents and grandfather did not contradict the plan, and Kirill, while feeling it strange that Grandmother had chosen him as her constant companion, found the mysterious attraction of ritual in these trips.

And so they walked down Aviamotornaya Street past the unusual houses of postwar construction: four stories high with sharply steeped roofs, subtly German, and Kirill thought that this previously German neighborhood was spreading its imperceptible influence and changing the local architecture. Lettuce green, with slate roofs, these houses had formerly had tile roofs and were painted white, according to his grandmother.

Then they turned left, walked past the school and the ponds with non-working fountains. Through the thick poplars encircling the pond, there were glimpses of a high wall, puce, Kirill had never seen that color anywhere else, and it seemed alien to him, brought from abroad. Three rows of shallow brick niches were set in the wall, resembling crosses and also abstract human figures—many buried souls. The same kind of trees grew behind the wall, but a sensitive heart ascribed a different meaning to them—these were the poplars and lindens of the cemetery, looking down from the crowns into the dark abyss of the graves.

One more turn to the right, along the asphalt path, and beyond the stands with artificial flowers, the gates: red brick, with five pointy towers and silver-plated spires that resembled the façade of a Catholic church.

Kirill shuddered going through the gates. The city in which everything was familiar, including the old mansions and the new concrete buildings, remained outside, beyond the cemetery wall. Inside the gates a new space revealed itself, one that was entirely unfamiliar, as if an unknown power had brought a huge piece of land from far away, and Moscow grasses grew upon it, Moscow lindens set roots in it, but still you could tell: this was foreign terrain.

Your own, but alien. Alien, but your own.

Following the example of his elders, Kirill never told anyone that their family plot was in the German Cemetery. That was the custom in the family; Kirill valued being privy to the mystery that resembled a curse.

Grandmother Lina never led him to the grave by the direct and simple path along the main allée. She turned left then right along narrow paths among the decrepit, shuttered vaults and listing memorials with inscriptions in German, English, and French. Sometimes she stopped to catch her breath—the paths clambered the slopes of a hill over the Sinichka River where the water had been channeled into pipes—as if paying the tribute of memory to some unknown person. Kirill quickly realized that she always stopped in the same places—either her strength gave out at exactly the same distances or she truly was silently commemorating someone. Kirill started looking closely at the spots, but he didn’t understand a thing: black diabase monuments resembling slabs of darkness, dug out of the grim depths of the night, bore foreign names that said nothing to him, and with all his imagination he could not connect the names with his grandmother.

Then they came to a low border sunken into the ground; among the ferns stood a small tombstone of gray marble: Sofia Uksusova, 1884–1941. This was the mother of Grandmother Lina, Kirill’s great-grandmother. To the left and right—also inside the border—were two limestone monuments. The one on the right looked like a chest of drawers, the Gothic script, worn by frosts, rain, and wind, barely visible. The left was like an altar; the stone table was covered by a stone altar cloth with tassels, with an open book of stone on top of it.

Kirill did not understand church symbols, no one in the family prayed or went to church. He felt the heavy significance of the stone book, and when his grandmother turned away, he stole furtive looks: were there letters on the stone pages? Kirill knew there weren’t, but he believed that the letters existed and would appear someday.

He never looked closely at the inscription on the right obelisk; he felt the letters repelled his gaze, did not allow themselves to be read, as if the person beneath the stone was locked in his death and wanted nothing from the world of the living.

The book. He was deeply moved only by the stone book in the edifying simplicity of its empty pages.

Kirill felt a vague challenge coming from it: the one who has the right can read it. He went to the cemetery with his Grandmother for the sake of that book, as if it were calling him, reminding him, in some sense cultivating him for itself.

Kirill could not understand why his great-grandmother was buried in the German Cemetery. In foreign soil. Who had led her soul through the foreign, turreted gates?

“Not since Alexander Solzhenitsyn has Russia had a writer as obsessed as Sergei Lebedev with that country’s history or the traces it has left on the collective consciousness … The best of Russia’s younger generation of writers.”

“Outstanding … Lebedev muses in Tolstoyan fashion about ‘the energy flow of history,’ by which the actions of distant ancestors can fix the destinies of people hundreds of years later. Antonina W. Bouis has once again delivered a translation of determined, adamantine beauty.”

“The Goose Fritz is Lebedev’s third novel after The Year of the Comet and Oblivion. All three are coming-of-age stories driven by sharp awakenings and have been beautifully translated from Russian into English by Antonina W. Bouis. Lebedev’s latest is his most ambitious, tackling a huge swath of Russian history — from the beginning of the 19th century up to the present day — while never letting its pacy, compelling narrative flag … brave and unflinching.”

“Masterly … Readers get a palpable sense of history’s weight and also of its loss … Another inspiring Lebedev work.”

“Lebedev’s prose is lyrical as a rule: cast in assonant patterns, attentive to rhythmic weight, responsive to the habits and desires of language. Antonina W. Bouis’s translation is both faithful and inspired, spinning the story out in a tirelessly beautiful English.”

“Lebedev’s characters seek ways to cut the umbilical cord with the past.”

“Fascinating … An evocative excursion across more than a century, The Goose Fritz provokes consideration of national identity and the role it plays in sustaining an individual.”

“I met Sergei Lebedev … There was something indomitable about him that made me think about an animal that won’t let go of something when it gets its teeth into it. Lebedev’s books dealt with history — it lay like a shadow over everything he wrote — and the fact that its presence was so powerful suggested that the conflicts and tensions inherent in it were still unresolved, still had a bearing on Russian society in obscure yet palpable ways.”

“An overwhelming historical and literary panorama.”

“Focuses on the hatred of outsiders, the cruel relief strategies of a frightened society …. An uncompromising critic of the Russian government … Lebedev sees the mounting persecution of a minority not only as a consequence but almost as an inherent condition of totalitarianism.”

“The hero of the novel, Kirill, enters a new world where he is confronted with shocking knowledge. It’s almost as if alongside the laws of physics there is also the enigmatic force of history, the gravitation of the living past … Lebedev strives to give expression to the unspeakable, to write about the violence, the war and the terror of Russia’s recent past. Lebedev tells the story in lush and melancholy verbal imagery.” 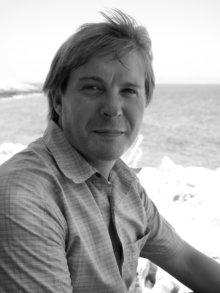