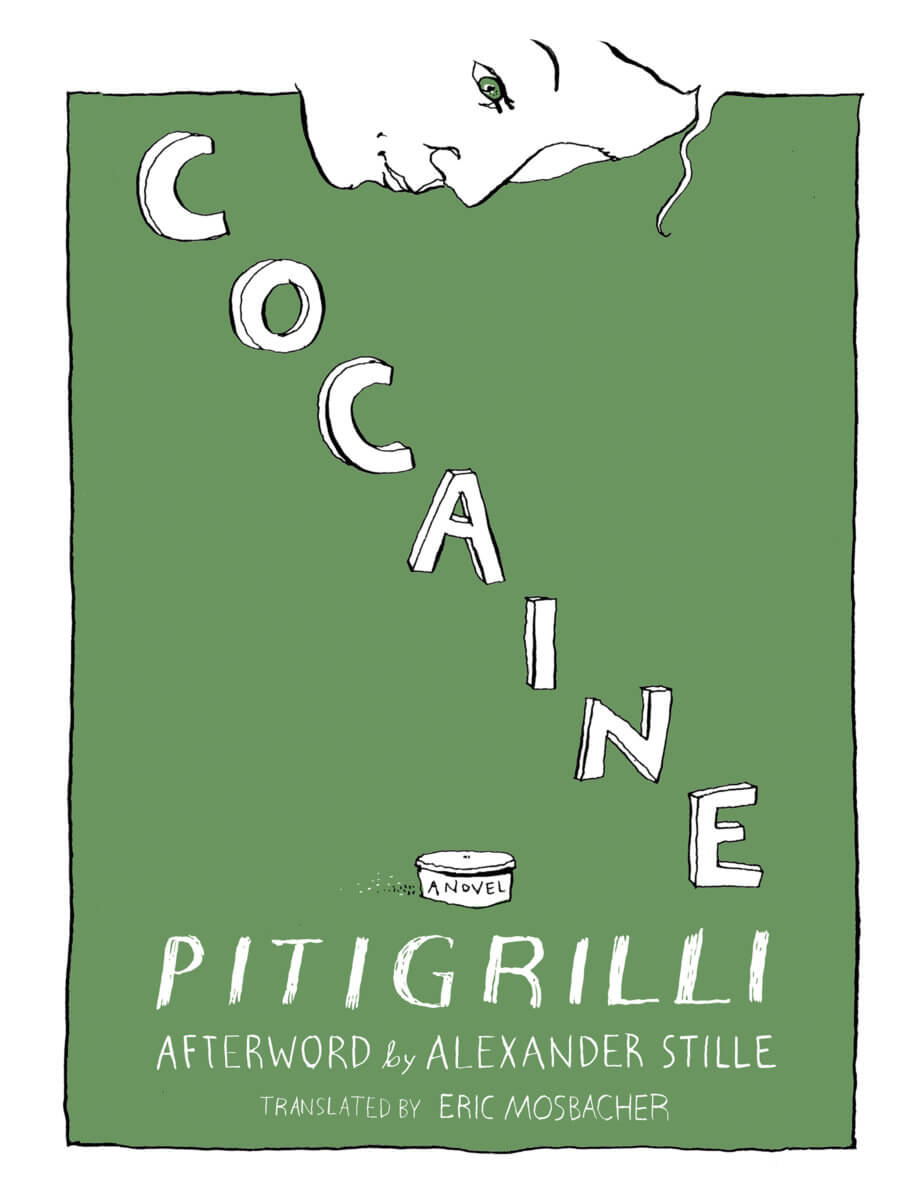 Paris in the 1920s – dizzy and decadent. Where a young man can make a fortune with his wits … unless he is led into temptation. Cocaine’s dandified hero Tito Arnaudi invents lurid scandals and gruesome deaths, and sells these stories to the newspapers. But his own life becomes even more outrageous than his press reports when he acquires three demanding mistresses. Elegant, witty and wicked, Pitigrilli’s classic novel was first published in Italian in 1921 and charts the comedy and tragedy of a young man’s downfall and the lure of a bygone era. The novel’s descriptions of sex and drug use prompted church authorities to place it on a list of forbidden books, while appealing to filmmaker Rainer Werner Fassbinder who wrote a script based on the tale. Cocaine retains its venom even today.

The novel features a critical afterword by Alexander Stille, an American author and journalist whose work appears in The New Yorker, The New York Times, and The New York Review of Books. He is the author of several books, including Benevolence and Betrayal: Five Italian Jewish Families Under Fascism, and The Sack of Rome, a book about corruption and crime in Italy under Silvio Berlusconi.

Through the steamed up windows two dense and continuous streams of people were to be seen. The sound of their voices, the brouhaha, the trampling of feet, the movements of the crowd, suggested a color — bitumen mixed with a uniform grayish yellow, against which the occasional cry of a hawker, the loud laughter of a street Arab or a woman’s shrill voice stood out like splashes of red, blobs of white, daubs of violet, parabolas of silver, jets of lilac, quivers of green, hieroglyphics of yellow, arrows of blue. The agile, springy legs of women contrasted with the leaden monotony, all of them long, slender, muscular, pink and wrapped in their silk stockings as if by a spiral of thread that wound round their thighs and calves like the grooves of gramophone records.

The modern Venus no longer has the soft, plump gracefulness that our grandfathers sought (with their hands); the contemporary Venus reminds one of the androgynous girl in a troupe of British gymnasts.

“And so I drink,” said the man who smiled out of politeness. “Love might perhaps be left to me, but I’ve at last realized what love is. It’s a sweet poison that comes to me from a woman I like. After some time all the poison I’ve absorbed makes me immune, and then the poison that continues to come to me from her no longer affects me.

“Once upon a time I still had the stimulus of being faced with rivals, and I tried to fight them, but now that I’m chief sub-editor, now that I’ve ‘arrived,’ I’m also finished. I’ve lost the joy of struggle, chiefly because I have no more enemies, but also because if I had I would not take the trouble to fight them. I’ve come to see that competitors are necessary to those who want to get on in the world. Opposition is indispensable to success. We should have realized that elementary truth from the embryonic beginnings of life; spermatozoa have to swim upstream to reach the ovary.”

“I never state paradoxes, because generally they are nothing but cleverly presented absurdities,” the chief sub-editor replied. “I claim that enemies are extremely useful when you know how to handle them properly. In medicine, as you know better than I do, germs are used to fight the illnesses that they cause, are they not? The whole of serotherapy is based on the exploitation of our enemies to our own advantage. Isn’t the leech a parasite of man? Well, in a doctor’s hands it’s a very useful thing. Enmity is a force, a negative, contrary force, but it’s still a force, and all forces are exploitable by man to his own advantage. What do you think?”

The chief sub-editor turned to Tito and said: “You remind me of those who say it’s stupid to believe that seventeen’s an unlucky number, because it’s a number like any other; thirteen is unlucky, of course, they admit, but seventeen isn’t. That’s exactly what you do, Arnaudi. You’re killing yourself with cocaine, and you think it’s stupid of me to be killing myself with alcohol. You don’t see that if the two of us get on well it’s because there’s an affinity of poisons between us which in turn has led to an affinity of ideas.

“You and I have the same type of mind, and basically Pietro Nocera has it too. The three of us get on well because we are all three attuned. We are simply men of our time, not three exceptional individuals who have come together to form a particular triangle. I may be wrong in saying that it’s our poisons that have made us like this. Perhaps it’s our being like this that makes us drown ourselves heroically in our sweet poisons. However that may be, I’m happy poisoning myself; and, as it give me a little joy, it would be absurd not to do it. If half a liter of alcohol is sufficient to do away with depression and transform the world in my sight, and if all I have to do to get half a liter of alcohol is to press a button, why should I deprive myself of it? If it were painful, I should understand. We could rid ourselves of all the agonies of love by having an operation, but it would be painful, and an operation is always a step in the dark. Instead I regulate my intake of alcohol myself; it’s a tool I use on myself with my own hands. I know very well that it earns me a great deal of disapproval, but I go on drinking all the same, because these five or six glasses give me a sense of well-being and result in insults seeming to be acts of courtesy, in sorrows being transformed, if not into joys, at least into indifference. Being removed from reality, I see it with the changed perspective that forms the basis of irony. What could be better than being near one’s neighbor without recognizing anyone and living in a kind of unconscious intoxication? Fools say I’m ruining myself, but what I say is that the fools are those who cling to the useless and contemptible thing that is life. Even our editor, who has such a clear mind, sometimes makes me sit down in front of him, tries to counteract the bellicosity of those ferocious moustaches of his by the gentleness of his voice and advises me to give up drink. But it’s only when I’ve been drinking that I’m fit for work, flexible, docile. When I’ve been drinking he could order me to polish the floor and I’d do it.”

A thin, pale lady, dressed completely in black, came in, looked round, and sat at a table.

The waiter brought her writing materials and her drink.

The lady wore a black tulle hat through which you could see the waves of her black hair; a black bird of paradise descended over one temple, caressed her neck and curved under her chin. Her face seemed to be framed in a soft, voluptuous upside-down question mark.

When she had finished her letter she summoned a small page boy, who was all green and gold, glossy and shining and covered with braid, and handed it to him. The boy raised his right hand vertically with the palm outwards to his green, cylindrical unpeaked cap, which was kept in its crooked position by a black chinstrap. Then he went out on to the boulevard, dodging between the buses.

Pietro Nocera went over to her, asked if he might introduce his friends, and invited her to join them at their table.

She looked through the question mark and smiled. Her face was pale and her mouth thin and rectilinear as if it had been cut with a scalpel. When she smiled she lengthened it, stretching it half an inch on either side without curving it.

The chief sub-editor had been to Armenia in the course of his career as a journalist, and this led to the immediate establishment of cordial relations. She reminded him of the customs of the country, the martyrdom of its people, the color of its mountains, the passionate nature of its women.

And while the two revived memories Tito murmured to Pietro Nocera in Italian: “What marvelous oblong eyes.”

“Try telling her that, and you’ll see that she’ll start working them immediately. She’s the woman I was telling you about yesterday. She’s the one with the magnificent ebony coffin in her room. It’s padded with feathers and upholstered with old damask.”

“Ask her straight out?”

“Yes. She’s a woman who can be asked that question.”

He turned to her and said: “Is it true, madame, that you have a black wooden coffin and —”

“And that I use it for making love in? Certainly I do. It’s comfortable and delightful. When I die they’ll shut me up in it for ever, and all the happiest memories of my life will be in it.”

“It’s not the only one,” the lady continued. “It also offers another advantage. When it’s over I’m left alone, all alone; it’s the man who has to go away. Afterwards I find the man disgusting. Forgive me for saying so, but afterwards men are always disgusting. Either they follow the satisfied male’s impulse and get up as quickly as they do from a dentist’s chair, or they stay close to me out of politeness or delicacy of feeling; and that revolts me, because there’s something in them that is no longer male. How shall I put it? Forgive me for saying so, but there’s something wet about them.”

She turned to the chief sub-editor and resumed their interrupted conversation.

“A painter,” Nocera replied. “But a woman like that always has five or six replacements available.”

“Pitigrilli … deserves rehabilitation. His bleak and brilliant satire, lush and intoxicating prose, and sadistic playfulness remain as fresh and caustic as they were nine decades ago. His tragic vision of the human condition, expressed through ironic wit and eloquences, distinguishes the great literature of any era.”

“Cocaine is a brilliant black comedy that belongs on the same shelf as Evelyn Waugh’s Vile Bodies and Dawn Powell’s The Wicked Pavilion. Pitigrilli is an acidic aphorist and a wicked observer of social folly.”

“Pitigrilli was an enjoyable writer – spicy and rapid – like lightning.”

“Pitigrilli is a highly emblematic forgotten figure, a poète maudit of Italy of the 1920s; his cynical comic satire describes the disillusioned world that followed World War I and proved fertile for the triumph of fascism.”

From the Afterword by Alexander Stille

“Seriously wicked … It deals playfully and brutally with provocative issues of promiscuity, prostitution and ecstasy, and remains at its heart filled with pure, romantic longing.”

“The name of the author Pitigrilli … is so well known in Italy as to be almost a byword for ‘naughtiness’ … The only wonder to us is that some enterprising translator did not render some of his books available in English sooner.”