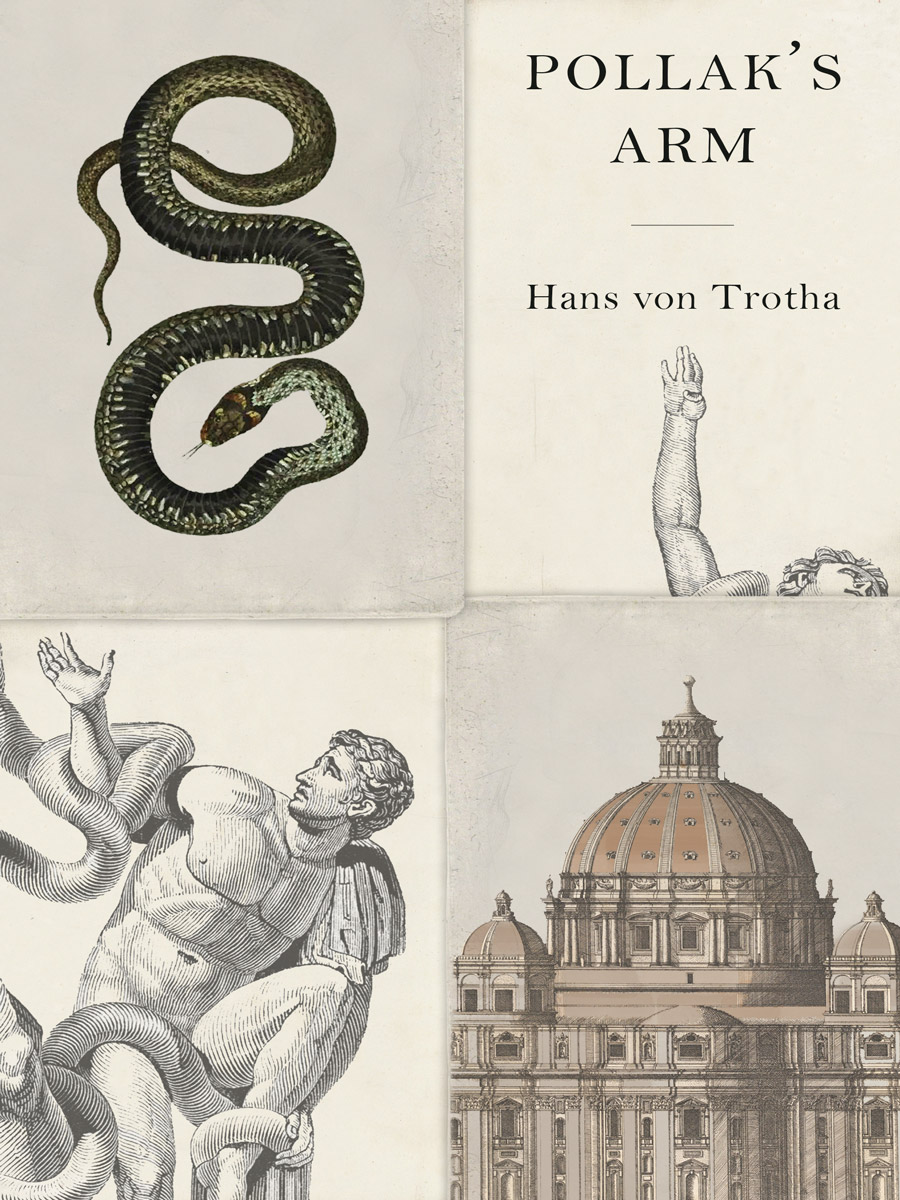 October 16, 1943, inside the Vatican as darkness descends upon Rome. Having been alerted to the Nazi plan to round up the city’s Jewish population the next day, Monsignor F. dispatches an envoy to a nearby palazzo to bring Ludwig Pollak and his family to safety within the papal premises. But Pollak shows himself in no hurry to leave his home and accept the eleventh-hour offer of refuge. Pollak’s visitor is obliged to take a seat and listen as he recounts his life story: how he studied archaeology in Prague, his passion for Italy and Goethe, how he became a renowned antiquities dealer and advisor to great collectors like J. P. Morgan and the Austro-Hungarian emperor after his own Jewishness barred him from an academic career, and finally his spectacular discovery of the missing arm from the majestic ancient sculpture of Laocoön and his sons. Torn between hearing Pollak’s spellbinding tale and the urgent mission to save the archaeologist from certain annihilation, the Vatican’s anxious messenger presses him to make haste and depart. This stunning novel illuminates the chasm between civilization and barbarism by spotlighting a now little-known figure devoted to knowledge and the power of artistic creation.

Watch a video of author Hans von Trotha discussing Pollak’s Arm with historian David Kertzer, winner of the Pulitzer Prize for his book The Pope and Mussolini, at an event sponsored by Rizzoli Bookstore and the Centro Primo Levi in New York. Click here to watch.

It seemed Pollak was trying to avoid or ignore my call to alert his family and prepare. He had moved to the window and stood there like a figure seen from behind in a Caspar David Friedrich painting, the fading light of a rainy fall afternoon providing the backdrop. I had clearly failed to convey the urgency of my mission. Either that, or he chose not to acknowledge it. I didn’t know what to do. When I set out for Palazzo Odescalchi, it never crossed my mind that our talk might drag on. Danger was at hand. It was obvious. I thought it must be obvious to him too.

Is that the car? he asked. The driver just got out. He’s coming inside. He’s in uniform. SS.

Those words revealed Pollak’s fright at what he saw, but even so, his response was far more muted than seemed appropriate to me. Nevertheless, I felt a momentary hope that the shock might remind him of what was happening and bring him to his senses. I informed him of our cover, assured him that the uniform was no cause for concern, that the driver was loyal—to us, that is. I went to the other window and watched the driver below. He approached the building, then disappeared through the tall gate between the pillars of the baroque façade. The vehicle looked abandoned on the street. A moment later there was a knock on the door to Pollak’s apartment. Though we knew who it was, we both jumped.

Shall I get it? I asked him. I walked down the corridor and opened the door. The driver whispered that he could not wait on the street much longer, or at all, once the sun set. He gave me an address a few doors down and around the corner. He would wait there in the courtyard. He, too, implored us to hurry.

Doctors, midwives, and priests are exempt from the nightly curfew, I said to Pollak as I returned. I am none of those things. For that reason, we have to hide the car. And we have to hurry. At whatever cost, we must make it to the Vatican before nightfall.

Pollak appeared indifferent to the conversation I had had with the driver. He was more interested in the make of car.

He was still standing by the window. He must have seen the driver leave the house, climb back into the car, turn around, and drive up the street.

Strauss had the same one, Pollak said. The very same one. Could that be? Or was that too long ago?

Strauss? I asked. He interpreted my involuntary response as an invitation to continue his story.

I have guided many, many people—hundreds, easily—through the collections of Rome, the major private collections in particular. No one has ever known them as well as I. People knew that in Europe, but not just in Europe.

Please, have a seat, he said for the first time, gesturing toward the bookcase and a table with armchairs positioned at either end. I politely declined and stood demonstratively near the door. He did not sit down, either, but remained where he was by the window. Then he told me about J. P. Morgan.

”Deeply satisfying … Rich … In slack cultural times, we need astringent art to give us moral strength, and this little tale seems to offer precisely that.”

“Quietly powerful, closely written … a lament for a lost world … This work has the appearance of a chamber piece … but ends up as something infinitely grander. It is also a book in which the tension builds and builds, not only an absorbing and deeply moving read, but, to put it crassly, a page-turner: I finished it in one sitting.”

“In Hans von Trotha’s haunting novel Pollak’s Arm … beautifully translated into English by Elisabeth Lauffer, the setting is Nazi-occupied Rome on October 16, 1943, the Saturday when the Gestapo rounded up the city’s Jews—the day when the barbarians came knocking door to door … We hear spellbinding tales.”

“At a moment when war has once again come to Europe and the relationship between culture and conflict is headline news, ‘Pollak’s Arm’ is a timely reminder that art is no defense against brutality, that civilization is a thin skein easily shredded once tanks and troops start enforcing their rough rule … A love letter to art.”

“This enthralling novel describes an undying passion for antiquity with an underlying theme of great poignancy. A great read.”

“Possible to read in one sitting but, once read, impossible to stop thinking about … Pollak’s Arm is a quiet and surprising masterpiece set during World War II, certain to make readers think deeply about history, philosophy and art.”

“Nazi forces bear down on a Jewish scholar in Rome in Hans von Trotha’s erudite novel … Tense yet enthralling.”

“Pollak’s Arm is a poignant ode to storytelling, bearing witness to historical memory from the Trojan War to World War II … marvelous enough as a short story. Yet von Trotha masterfully weaves it into a much larger saga linking to an ancient Greek myth and a sculpture. It becomes a Haggadah in the sense of a Jewish Passover story to tell your children over and over.”

“Hans von Trotha has told a beautiful, complex story in Pollak’s Arm. In writing about it, the temptation is to keep quoting and quoting. There is so much in it; it’s crammed with precious treasures.”

“Brilliant … A cautionary tale about the beauty of art often being no match for the boot and the fist. This multilayered account of myth and injustice has much to offer.”

“The novel resembles a one-act play … capturing a life enriched by its commitment to art and antiquities and a man who makes an unusual decision when faced with a crucial choice. A work that weaves art and history into a fascinating tale.”

“This intense and exciting book brings back to life the voice of Ludwig Pollak who, when confronted with Nazi-occupied Rome’s grim reality, powerfully conveys a taste for collecting, the pleasure of erudition, and an unshakeable faith in culture. This period of European history—remarkably captured here by Hans von Trotha—still has much to tell us.”

Salvatore Settis, chairman of the Louvre Museum Scientific Council and author of Laocoön and If Venice Dies

“Hans von Trotha has composed a small jewel of a novel. Set as the Holocaust reaches Rome in October 1943, it quietly evokes an archaeologist’s reflections on a European life of scholarship and art. The result is physical death for him and his family. Yet this book offers vivid testimony of his words and actions in defense of humane culture against barbarism.”

R. J. B. Bosworth, author of Mussolini and The Oxford Handbook of Fascism

“Something special, that is, above all, something that will stimulate your thoughts … The book is a treasure trove for those interested in art history  … With an intensely packed narrative, the very substantial novel deserves to be read twice.”

“A book every traveler to Rome should put in their luggage.”