Building upon her celebrated autobiography Distant Fathers, Italian author Marina Jarre returns to her native Latvia for the first time since she left as a ten-year-old girl in 1935. In Return to Latvia—a masterful collage-like work that is part travelogue, part memoir, part ruminative essay—she looks for traces of her murdered father whom she never bid farewell. Jarre visits the former Jewish ghetto of Riga and its southern forest, where tens of thousands were slaughtered in a 1941 mass execution by Nazi death squads with active participation by Latvian collaborators. Here she attempts to reconcile herself with her past, or at least to heal the wounds of a truncated childhood. Piecing together documents and memories, Return to Latvia explores immense guilt, repression, and the complicity of Latvians in the massacres of their Jewish neighbors, highlighting vast Holocaust atrocities that occurred outside the confines of death camps and in plain view.

Excerpt from Return to Latvia

Three times now I’ve spent the month of July with friends, two couples, on the western coast of Sardinia, in a house fifty meters from the sea. The house was situated between two others, fairly distant, on a rise above a solitary beach, and was surrounded by thick, low mastic bushes bent by the wind. At the foot of the steps lay a carpet of pink saxifrage; around the corner to the southeast, which was more sheltered, grew a large purplish-red bougainvillea. A few days after our arrival, the flowers began to bloom furiously, to spread their petals; a jumble of new, runaway shoots emerged from the density. This was how the plant demonstrated its enjoyment of more regular watering.

I write grew, lay, began. I should, of course, replace those pasts with a present. The house is still there, the flowers bloom, the mistral slams it, and it meets the wind not unlike a solid ship against the storm. And yet if I think about the house, it appeared, rising up there on the hill, just as we reached it, driving along the narrow sandy road. And so a few weeks later, when we left, it disappeared.

As twilight approached—a moment before the sun descended into the sea—I left the house and set out with my phone toward a hilly crest not far inland. You couldn’t make calls from the house. I walked on the sand-and-gravel path in the rosy light as it faded to a luminescent pallor over the surrounding expanses, which here and there dipped down between rockier ridges.

On the way up, I placed my feet securely on the rocks, small thistles, and dry rockroses: the path itself guided me, leading me to the usual point where my call would be able to reach one of my people.

My people? Children, a grandchild, a friend. My people are few, increasingly confined to a small circle.

And increasingly vast and out of reach was the world around them, the crowd that lived, survived, died. Sometimes I felt that immense swarm of lives elude my grasp completely; readings, writings of all kinds and facts were no longer enough to perceive it, embrace it in thought and with the senses; groping around me I no longer touched a hand, no longer felt the warmth of other bodies, the breath of other mouths. This is old age, I said to myself, being absorbed in, limited to, one’s own carcass.

As I walked along the known path, calmly placing my feet on the evening trail, the vise that locked me in myself loosened, relaxed into a void that wasn’t anguished—whether because of the sense of well-being that came from daily swims, or the renewed pleasure of a long read (I was reading and rereading the rediscovered Onegin, during hours of repose on a bench, with the Russian dictionary beside me), or the cries exchanged by strangers in the neighboring house, hidden in an impenetrable thicket of small palms and eucalyptus.

In the meantime the sky was dimming, but had yielded a gray still pulsing with light, and here and there a paler rock preserved its outline in the spreading half-light.

I scanned the sky as it mutated from twilight opalescence to the clarity of evening. Sometimes we played a game among ourselves to see who would be the first to pick out Vesper the moment it appeared; but as soon as someone exclaimed, “There it is!” the star was already visible, its brilliance instantaneous.

I made calls while standing in the magic circle halfway up the hill. The voices that a few centimeters lower couldn’t reach me now sounded close, familiar, as if in the next room, in fact as if originating within me. So unbounded was the space around me—the sea indistinguishable now from the shore, and, on the sea, the lost, distant, and intermittently flashing signal of the lighthouse to the right, and on the land the lost, random reflection of a light from a window of our house—and so infinite the orbit of the horizon that it seemed to me to truly evoke, with a gesture of domestic magic up there on the windy ledge, the voices of my dear ones.

Thus news and reassurance reached me, not many questions. I asked some, for form’s sake. In fact I didn’t want to know anything; I wanted to stay outside, I had finished. Oh yes, I had finished. I listened to those voices that required nothing more, requested nothing more; they sounded in my ear, detached from faces and presences, only because I listened to them, the voices of my dear ones in the evening.

If I went down in the dark, I didn’t turn on the little flashlight I carried in case I had to read a telephone number. I liked walking on the path in the darkness; I’d known it for centuries, there were no obstacles or unexpected obstructions. It was a secure path among rocks, rockroses, and dry thistles.

If I happened to go up at the end of the sunset, then when the phone calls were over I continued on in the last light and in a few steps reached the wild fig tree. Sheltered by the rounding at the top of the hill, it extended, low and sturdy, without fruit, and in the evening dampness its small hardy leaves gave off the last whiff of a bitter scent of sun.

Returning, I’d recall the serious, sweet child’s voice of Giovanni, my youngest grandson, holding it in its small rainbow-colored shell. He happily gives me precise information, and if I get something wrong—bumbling grandma—he kindly, meticulously corrects me. He unconsciously measures my time, which is unlikely to extend into his adulthood.

One evening when I had just set out in the vast silence of the slope, the air above and behind me began to vibrate strangely with a regular, faint but energetic pulse. I turned and not far from the peak saw a flight of some twenty large birds, dark in the shadows. The flock was heading southwest with determination, wings beating in unison. Toward the island, I thought, that lay in that direction, whose shoreline could be glimpsed low on the horizon.

It was July, but the unexpected appearance and disappearance of the migrating flock seemed bizarrely autumnal.

Yet it didn’t strike me as in the least unnatural, since the rapid rhythm of the tendons working in flight was audible and real as the big, dark birds passed swiftly, cleaving the air with a light rustling.

In an instant they were over the hill and out of sight. I was immediately sure that they carried a message, but I wasn’t able to decipher it. Besides, I was in no hurry for predictions; I wait for such messages to reveal themselves on their own, for them to choose their moment.

I turned and continued my descent, and in the meantime my mind—prodded perhaps by my steps on the ancient path and, at the same time, by the wild odor of the barren fig or the swift rustling passage of the flock headed toward a resting place (along what route?)—began to scribble. To tell a story, I should say, first because this initial work is ragged and haphazard, but mostly because between telling a story and writing it an abyss opens before me: the language I write in and use daily. The language of my mother, which has perhaps become the language of my dreams (but do dreams really have grammar and syntax, or do they not speak within our souls while we sleep, with words, rather, that are all theirs and theirs alone?)—a language that’s not immediate, that I have to grasp again every time, and control, to render the improper proper. Which is never intimate. I use it as a tool even though, as we know, the craftsman is fond of his tool, cares for it, and puts it back after use.

So I, like a craftsman, am fond of it, take care of this language, and put it back. And I always have to take it out of the storage closet and polish it.

“A lush and devastating chronicle of a woman’s return to her birthplace to excavate her family’s tumultuous past. Exquisitely written, this contemplative narrative takes you into the heart and mind of a woman in search of truth.”

Shelly Sanders, author of Daughters of the Occupation

“A writer uncovers the cruel reality of her family’s past … A harrowing, culturally rich memoir.”

“Return to Latvia is an introspective memoir that reckons with the generational trauma and fragmented memories found in the long shadow of the Holocaust.”

“Marina Jarre is an original, powerful and incisive writer … Her works―true, small-scale, essential masterpieces―have found passionate readers and critics and have an indisputable place in Italian literature of the past fifty years.”

“A noble book … that like those of Primo Levi should be read by everyone.”

“Jarre has a moral motivation: to understand behavior as much as possible, to peer into the abject abyss, to probe the reasons for a conspiracy of silence.” 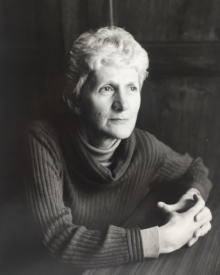