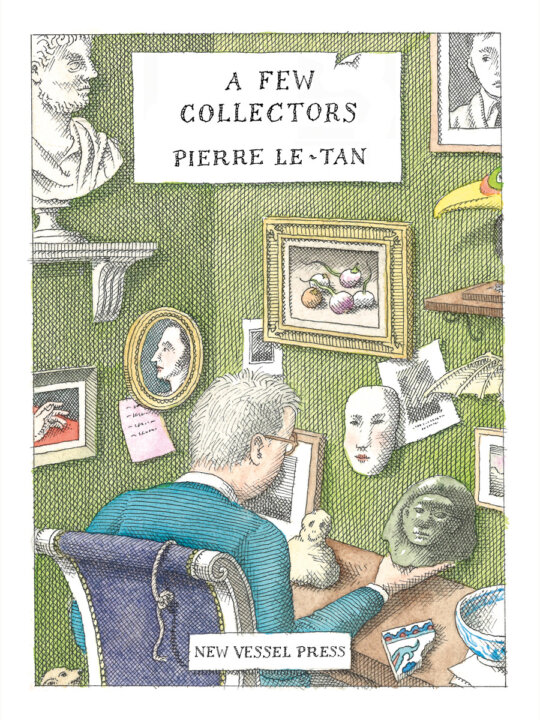 Beloved Parisian artist Pierre Le-Tan, known for designing New Yorker magazine covers and collaborations with fashion houses, summons up memories of inveterate art collectors in this utterly charming illustrated volume. He evokes fascinating, sometimes troubled figures through an array of intriguing and curious tales. With seventy of his distinctive pen and ink drawings—in vibrant color with meticulous cross-hatching—A Few Collectors opens a window onto the vast or minuscule world created by collectors out of a mix of extravagance and obstinacy. It recounts encounters in Paris, the Côte d’Azur, North Africa, London and New York, where Le-Tan’s subjects have amassed a range of treasures. Some involve famed figures like former Louvre Museum director Pierre Rosenberg. Others are insolvent aristocrats, princes of film and fashion, expatriate dandies, and flat-out obsessive eccentrics. Le-Tan devotes perhaps his finest chapter to himself. 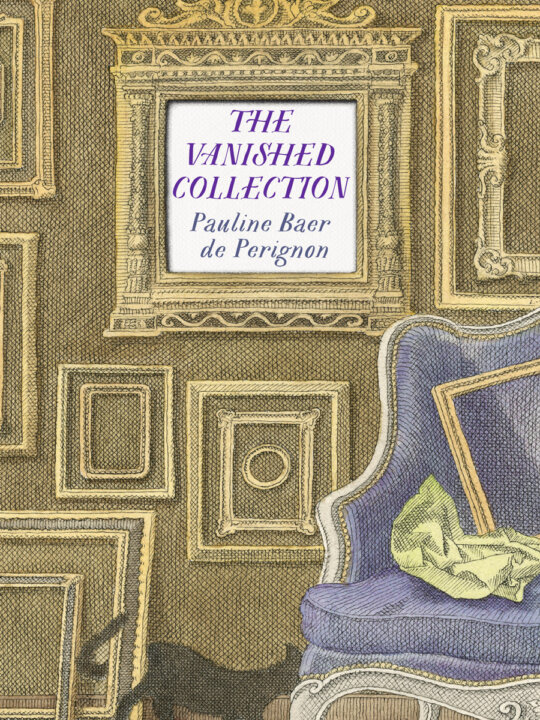 It all started with a list of paintings. There, scribbled by a cousin she hadn’t seen for years, were the names of the masters whose works once belonged to her great-grandfather, Jules Strauss: Renoir, Monet, Degas, Tiepolo, and more. Pauline Baer de Perignon knew little to nothing about Strauss, or about his vanished, precious art collection. But the list drove her on a frenzied trail of research in the archives of the Louvre and the Dresden museums, through Gestapo records, and to consult with Nobel laureate Patrick Modiano. What happened in 1942? And what became of the collection after Nazis seized her great-grandparents’ elegant Parisian apartment? The quest takes Pauline Baer de Perignon from the Occupation of France to the present day as she breaks the silence around the wrenching experiences her family never fully transmitted, and asks what art itself is capable of conveying over time.

Watch a video of author Pauline Baer de Perignon telling experts at Sotheby’s auction house how she obtained the restitution of a valuable French masterpiece plundered from her great-grandfather and that later hung for decades in a museum in Dresden, Germany. Click here to view. 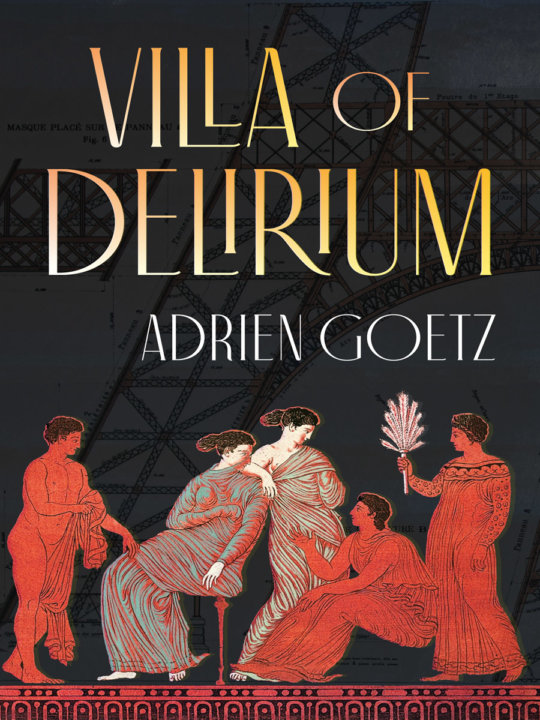 Along the French Riviera in the early 1900s, an illustrious family in thrall to classical antiquity builds a fabulous villa—a replica of a Greek palace, complete with marble columns and frescoes depicting mythological gods. The Reinachs—related to other wealthy Jews like the Rothschilds and the Ephrussis—attempt to recreate a “pure beauty” lost in the 20th century. The narrator of this brilliant novel calls the imposing house an act of delirium, “proof that one could travel back in time, just like resetting a clock, and resist the outside world.” The story of the villa and its glamorous inhabitants is recounted by the son of a servant from the nearby estate of Gustave Eiffel, designer of the Paris tower, and the two structures present contrasting responses to modernity. The son is adopted by the Reinachs, initiated into the era of Socrates and instructed in classical Greek. He joins a family pilgrimage to Athens, falls in love with a married woman, and survives the Nazi confiscation of the house and deportation to death camps of Reinach grandchildren. This is a Greek epic for the modern era.

Villa of Delirium is featured in a special report in The New York Times.

Take this spellbinding 3D virtual tour —click the “play” button in the bottom left corner — and explore the architectural creation that inspired the novel.
Download the Reading Group Guide for Villa of Delirium. 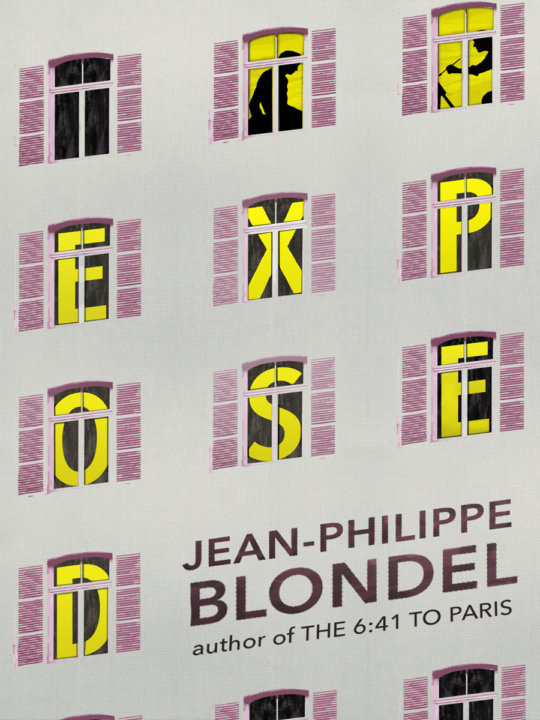 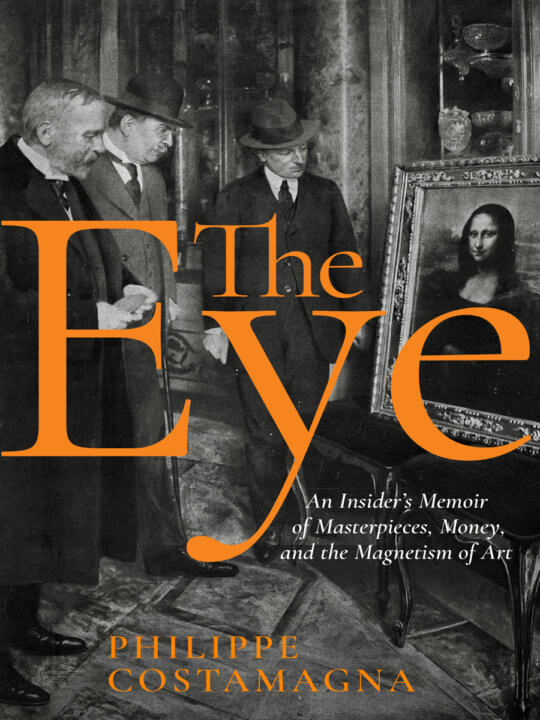 It’s a rare and secret profession, comprising a few dozen people around the world equipped with a mysterious mixture of knowledge and innate sensibility. Summoned to Swiss bank vaults, Fifth Avenue apartments, and Tokyo storerooms, they are entrusted by collectors, dealers, and museums to decide if a coveted picture is real or fake and to determine if it was painted by Leonardo da Vinci or Raphael. The Eye lifts the veil on the rarified world of connoisseurs devoted to the authentication and discovery of Old Master artworks. This is an art adventure story and a memoir all in one, written by a leading expert on the Renaissance whose métier is a high-stakes detective game involving massive amounts of money and frenetic activity in the service of the art market and scholarship alike. It’s also an eloquent argument for the enduring value of visual creativity, told with passion, brilliance, and surprising candor. 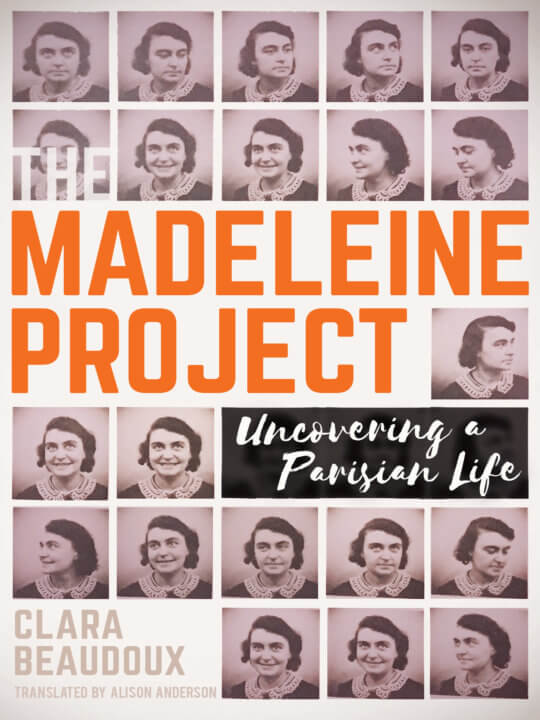 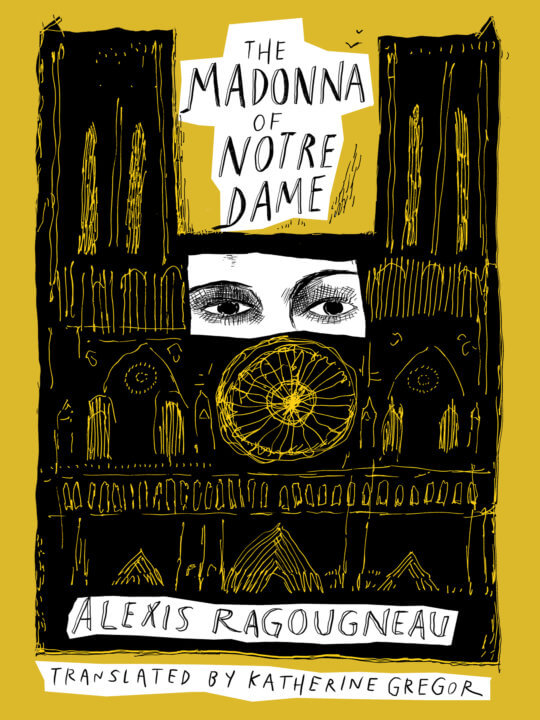 Fifty thousand believers and photo-hungry tourists jam into Notre Dame Cathedral on August 15 to celebrate the Feast of the Assumption. The next morning, a stunningly beautiful young woman clothed all in white kneels at prayer in a cathedral side chapel. But when an American tourist accidentally bumps against her, her body collapses. She has been murdered: the autopsy reveals disturbing details. Police investigators and priests search for the killer as they discover other truths about guilt and redemption in this soaring Paris refuge for the lost, the damned, and the saved. The suspect is a disturbed young man obsessed with the Virgin Mary who spends his days hallucinating in front of a Madonna. But someone else knows the true killer of the white-clad daughter of Algerian immigrants. This thrilling novel illuminates shadowy corners of the world’s most famous cathedral, shedding light on good and evil with suspense, compassion, and wry humor. 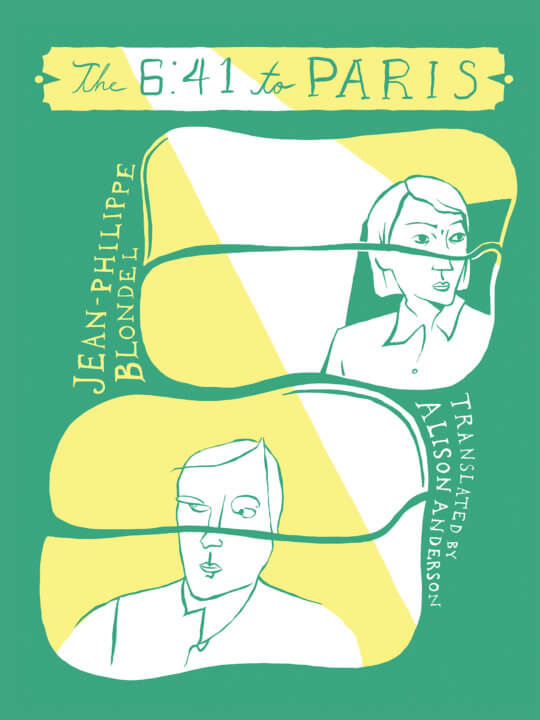 Cécile, a stylish 47-year-old, has spent the weekend visiting her parents in a provincial town southeast of Paris. By early Monday morning, she’s exhausted. These trips back home are always stressful and she settles into a train compartment with an empty seat beside her. But it’s soon occupied by a man she instantly recognizes: Philippe Leduc, with whom she had a passionate affair that ended in her brutal humiliation 30 years ago. In the fraught hour and a half that ensues, their express train hurtles towards the French capital. Cécile and Philippe undertake their own face to face journey—In silence? What could they possibly say to one another?—with the reader gaining entrée to the most private of thoughts. This is a psychological thriller about past romance, with all its pain and promise. 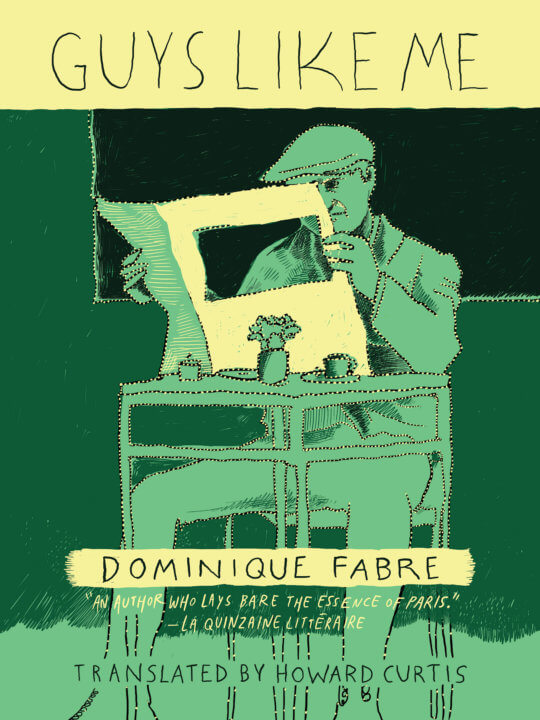 Dominique Fabre, born in Paris and a lifelong resident of the city, exposes the shadowy, anonymous lives of many who inhabit the French capital. In this quiet, subdued tale, a middle-aged office worker, divorced and alienated from his only son, meets up with two childhood friends who are similarly adrift, without passions or prospects. He’s looking for a second act to his mournful life, seeking the harbor of love and a true connection with his son. Set in palpably real Paris streets that feel miles away from the City of Light, Guys Like Me is a stirring novel of regret and absence, yet not without a glimmer of hope. 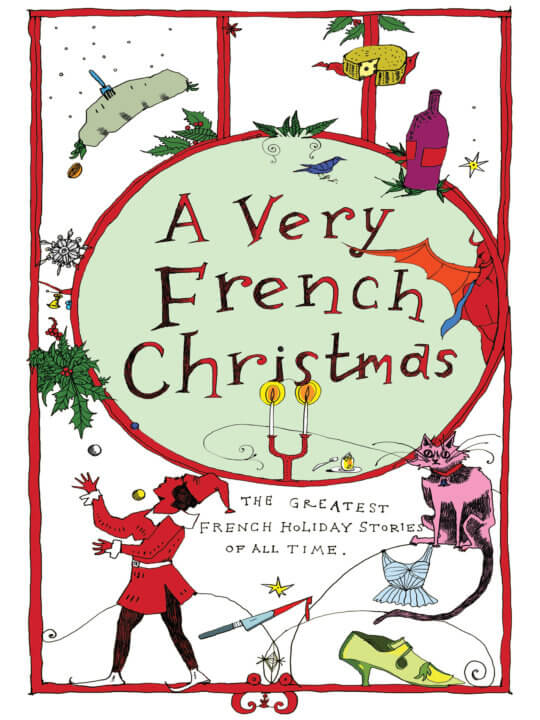 A continuation of the very popular Very Christmas Series, this collection brings together the best French Christmas stories of all time in an elegant and vibrant volume featuring classics by Guy de Maupassant and Alphonse Daudet, plus stories by the esteemed twentieth century author Irène Némirovsky and contemporary writers Dominique Fabre and Jean-Philippe Blondel. With a holiday spirit conveyed through sparkling Paris streets, opulent feasts, wandering orphans, homesick soldiers, oysters, crayfish, ham, bonbons, flickering desire, and more than a little wine, this collection encapsulates Noël and proves that the French have mastered Christmas. This is Christmas à la française—delicious, intense and unexpected, proving that nobody does Christmas like the French.